Unexpected connections in the Faroe Islands

“I'll happily show you the path, but first please come to my house and have something to drink”, said the old man.

We were on Suðuroy, the southernmost of the Faroe Islands. We'd taken the ferry from Tórshavn, the delightful capital of the islands, having already had an amazing week seeing some of the other islands (another story for another day). What would Suðuroy have to offer?

The ferry had taken about two hours, passing close to a striking pair of small islands called Stóra Dímun and Lítla Dímun. Stóra Dímun is sparsely inhabited, with little more than a farmstead. Lítla Dímun is even smaller: less than a square kilometre in size, just over 400 metres in height and uninhabited. Sheer inaccessible cliffs rise out of the sea, topped by steep grassy slopes rising to the summit plateau. Accompanied by a solitary fluffy cloud, the island seemed to exude mystique. Had anyone ever lived there? Did anyone ever visit? 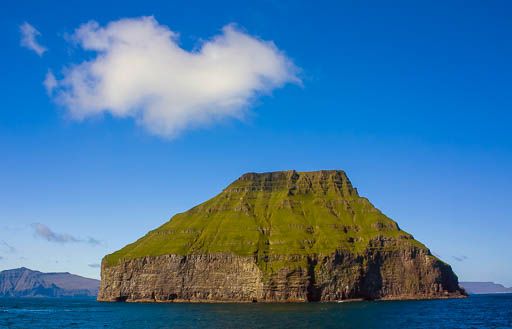 The next day rose bright and clear, though not overly warm. Our guidebook had recommended a walk up and across a mountain pass to the coastal village of Fámjin. So after breakfast in our guesthouse in Tvøroyri we walked through the nearby village of Trongisvágur, and then continued along a lane where our map indicated the walk would start. The mountains we were heading for loomed closer into view, and we were looking forward to starting the hike proper.

Map in hand, we stood to one side as a car approached from behind, the first we'd seen since leaving the village. It stopped, and a smiling old man got out and waved to us. “Good morning”, he said in excellent English, “are you looking for the path to Fámjin?”. We affirmed that we were, and that's when he offered to take us to his house for a drink and then back to the start of the path afterwards.

We'd already been struck by the friendliness and hospitality of the people we'd met in the Faroes, and by the slower pace of island life. We had all day, so of course we agreed and got in. It was only a couple of kilometres to the man's house. Modern looking from the outside, as soon as we entered it was just as we'd imagined a traditional Faroese home would be. Pictures of family adorned the walls, including some with our host from many years ago.

Sitting down, we were offered a small glass of a Faroese spirit and something to eat. The name of the drink escapes us now; it was strong but pleasant. The man explained he now lived on his own, his wife of many years having passed away a year or two previously. His children were grown up and living in Denmark, which he wistfully said was the way of things these days, but he saw them quite regularly.

We felt at ease talking to him. He began to tell us his story. Born on the island in the early 1930s, he'd never left. He spoke warmly of his memories of the British troops who'd occupied the islands during the second world war to prevent them falling into German hands. The troops, he said, had kept largely out of normal island life, and so there was little resentment or conflict. It's also, he said, why the Faroese still have a love of British chocolate.

The old man asked us if we'd enjoyed the ferry trip over. He seemed a little disappointed that we hadn't encountered the choppy seas conditions that often prevail, and are part of island life. We mentioned that we'd been struck by Lítla Dímun. His eyes lit up.

Every year, he told us, his father would join a group of men taking sheep by boat over to Lítla Dímun to summer pasture. We looked surprised; he explained that although it looks like nothing could get on and off the island, in the right conditions and aided by ropes it was possible. We were delighted to hear that the old man had been allowed to join the men once he was old enough. The connection between the island we'd seen only yesterday and this man's childhood memories from over seventy years previously seemed almost tangible.

Time had passed almost without noticing. We could have talked all day, but it was time to go and find our path. True to his word, we were driven to the start of the trail, and the old man showed us the cairns to follow up the slope. He warned us to take care on the scree, and in a few places where steep drops could befall the unwary. We assured him we would, and bade farewell.

The walk was just as we'd hoped. Following the cairns up, we came to a pass sandwiched between two peaks, with 360 degree views across the whole island. In the distance and well below us glistened a lake, and beyond that – just out of sight – lay our destination. 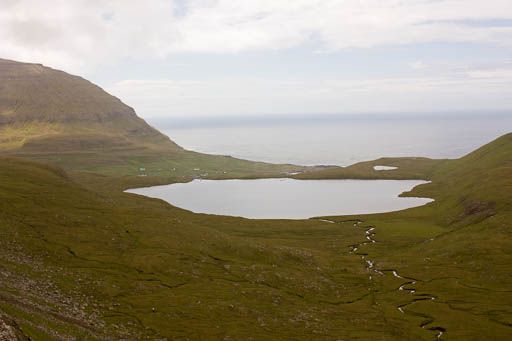 As we lost height the stony scree gave way to grass and the occasional shrub (nothing much grows in this windswept Atlantic outpost), and the church, houses and little harbour of Fámjin was within reach. 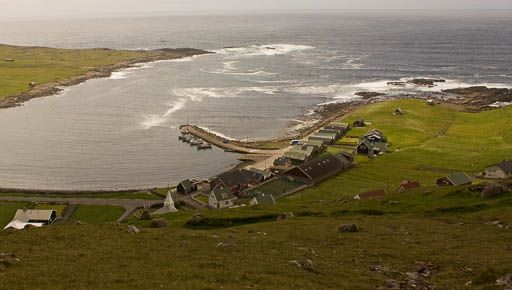 We knew about the church from our guidebook, and the old man had also told us we must go inside to see the original Faroese flag: the Merkið. Created in 1919, it became a symbol of the islanders desire for greater autonomy. The British allowed its use from 1940, and it became the official flag when the islands achieved home rule from Denmark in 1948. We remembered that the old man we'd spoken to just a few hours previously had lived through those times. 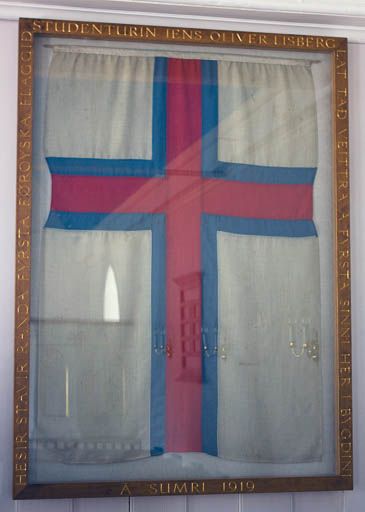 There was an hour or two to wait for the bus back, so we decided to see if the little cafe by the harbour was open. As we entered, someone at a table turned around: the old man himself. He'd driven over to make sure we'd got over the pass safely. We were moved at such a kind and thoughtful gesture; even more so when he offered us a lift back to our guesthouse. (This was not the only surprise in the cafe: the proprietor was our guesthouse owner, who explained that many people on the island had more than one job!)

Writing this a decade or so on, the memory of that day is still fresh, poignant and moving. That travel broadens the mind is a cliche, but perhaps it is even more rewarding when enduring moments unexpectedly find you than when they are sought.